Favorite adventure: Trail running and backpacking in the Yosemite backcountry.

Neil Dipaola is a nationally recognized thought leader in California coastal land use policy and sustainable development; and he is a frequent guest lecturer at the University of California, Santa Barbara; the Donald Bren School of Environmental Science; and Santa Barbara City College. His development projects have received numerous industry awards for their attention to sustainability and use of contemporary design and architecture and have been featured in over 100 periodicals including such publications as Dwell, Forbes, Sunset Magazine, Entrepreneur Magazine, and the Wall Street Journal; Dipaola was recently awarded California’s highest honor – The Governor’s Economic and Environmental Leadership Award by Governor Jerry Brown and the California Environmental Protection Agency – for his pioneering work to develop net-zero energy buildings in California.

Chris is AutoCamp’s President, previously serving as CFO, and CIO. He is focused on development of the property pipeline, capital sourcing and structuring, M&A, strategy, and team oversight. His background includes investing on behalf of hedge funds and private equity funds,  investment banking, hospitality, and several entrepreneurial ventures.  Chris is passionate about building inspiring businesses that will have a lasting positive impact on society. He attended the Carroll School of Management at Boston College and earned his MBA from Columbia University.

Favorite adventure: Camping in the Serengeti.

Anjali serves as AutoCamp’s Chief Operating Officer responsible for building and scaling the company. Previously, as Principal & EVP Asset Management at Chartres Lodging, she was responsible for running the group’s $2.2 billion portfolio of assets. During this time, she participated in $2.8 billion of transaction activity, the planning and execution of $1.0 billion in renovations, and the launch of the group’s Hotel Management company. In recognition of her successful track record, she was awarded the top “40 Under 40” by M&A Advisor in 2013. Her operations experience spans multiple brands (Hyatt, Marriott, Taj) and countries including participating in the expansion of Marriott into India. Anjali served on the Board of Directors of the Hotel Asset Managers Association, regularly participates in speaking engagements including the Lodging Conference and Hotel Business and holds a Master’s degree from Cornell University’s School of Hotel Administration.

Katie serves as AutoCamp’s Vice President of People & Culture.  While going to school to pursue nursing, she started working at a local inn and fell in love with hospitality.  Before joining AutoCamp, she spent 14 years with Joie de Vivre Hotels working her way up through Operations and People Services.  Katie is a sucker for road trips, local dives and freshly baked bread.  She resides in Marin County with her husband, 5-year-old son and a menagerie of pets. 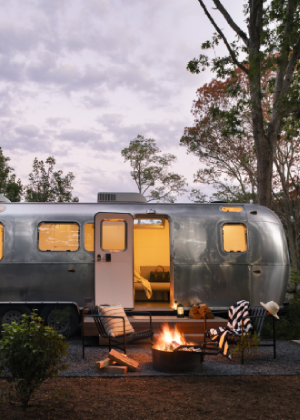